On Sunday 9 December 2012 FTC’s Johan Borg made his name known in the Ironman World, placing 6th overall at Ironman Western Australia in a time of 8.43. Have a read of how Johan’s day played out:

Swim – Before the swim start I was so nervous I was feeling sick (I may have vomited in the water during my warm up…..)  But as soon as the gun went I felt a lot better. The swim start was pretty frantic as usual, but after a few hundred meters it calmed down a bit and I found myself sitting at the back of the second pack until about the 1km mark. Then the group seemed to just disperse and I got dropped. After that I was swimming by myself for a while (which is not ideal in West Australian waters) until another small group formed that I managed to join up with for the remainder of the swim. I got out of the water just after 57 minutes. A bit slower than I wanted but I was feeling pretty fresh.

Bike – On to the bike and I was by myself for the first lap and a half. I got into a good rhythm early, although might have gotten a bit exited on the first lap and faded by a few minutes in the following laps. I also realized a few km into the ride that my two Powerbars (my only solid food) had fallen out of my pocket when I jumped on the bike. Slightly inconvenient, but luckily there was stuff to pick up from the aid stations.  About halfway through the ride I caught up to Jason Shortis (he had received a 4 minute drafting penalty on the previous lap) this broke up the ride, as there was someone to pace off. We caught Peter Vanbrousek and came into T2 together. I felt slightly out of place with these two as they would have done close to 200 Ironmans together…. 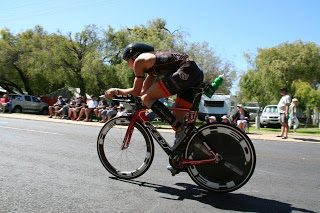 Run – I headed out of T2 with Shortis and Vanbrousek (still feeling slightly out of place!) I tried to stick with Shortis but after 500m I checked my watch and saw that we were doing 3:15min/km. I realized that might be a perfect recipe for disaster so I eased up a bit and tried to conserve energy. Shortis put a min or so into me in the first few kilometers and then it stayed pretty much the same to about the halfway mark. Vanbrousek was about the same distance behind me. I went through the first lap in just under 4min/km pace and went
through the halfway mark in about 1:25. I was feeling great at this point. I had passed quite a few of the guys that came off the bike ahead of me and I was running in 5th. I knew I wouldn’t be able to hold that pace for the whole run (although a 2:50 marathon would have been really nice) so I just tried to hang on for as long as I could. My pace kept dropping slowly but when I got to 27 km I really started hurting and my pace began dropping a lot quicker. This is when the distance to Shortis started to increase and a few kilometers later Vanbrousek passed me and I dropped to 6th. From then on I started walking every other aid station just to be able to get enough fluid in. Even though I was hurting I felt relatively ok, I got into a new kind of rhythm of just getting to the next aid station and I’m quite happy my pace never got slower than 5min/km. It also appeared that everyone else started to slow around this point as well so the gaps didn’t grow as much as I first thought they would. With about 3 kilometers to go I knew I wouldn’t be able to catch anyone in front and I had a safe distance to the closest person behind, so I really enjoyed those last few kilometers knowing that I would go faster than I’d hoped and finish quite a few places higher than I expected.

After the race a few people asked why I raced with a black armband.
6 years ago in March Helen’s dad died in a car crash on Tuart Drive where the Ironman bike course goes past. He might be gone but he is not forgotten.

Thanks to
Felt and Attadale cycles for setting me up with my bike and the guys at Total triathlon and Hed for my wheels. K-swiss for shoes (I race in k-ruuz). All the equipment worked perfectly.
Break your limits for all the help and support. Stuart Durham for helping me with my training and program.