The day started with a 3.00am alarm before departing Gunzenhouzen at 4.00am, making our way on a very packed but quiet bus to Roth.

A short walk over the bridge to T1 and we were one of the first athletes through T1 to our bikes. By now the sun was coming up and the cool damp transition area quickly filled with athletes. The music played over the speakers was somewhat interesting, not exactly motivational, ‘hype’ music, little more classical!
With only bottles and nutrition to put on my bike and tyres to pump I was keen to drop my T1 gear bag off and sit down before getting ready. Time went quickly. I was relatively calm and collected, with just a good amount of nerves. My swim start at 6.40am was the was first AG wave off and I was keen not to get caught at the rear of the 350odd females so I sunscreened up (forgetting my arms I realised after the race) and put my wetsuit on. Andy as usual helped calm my nerves and walked me to the start where we all waited to enter the water. The canon fired for the pros. Now I was next! A good luck kiss from Andy and see you in a number of hours! Our first iron distance race together and my first big race with out mum and Dad there but i knew they would be tracking me online at home!
I entered the water and had a look around at the spectators who had lined the canal and bridge. The hot air balloons were inflated and you could hear the excited crowd. I positioned myself to the right side of the rubber ducky in the middle of the start line. This would allow me to have a clear left side when the gun went and give me the chance to move left or stay right on the fastest pack. The cannon fired which was awesome! A good fast, clean run and I was so pleased with my start. It was refreshing to swim in the non salty water! As we made our way back just over the 3km mark the crowd got louder and I remember taking a few long sights to see the hot air balloons and the crowd over head on the bridge and banks.
Swim 59.56
Finally I cracked that 60mins! Still not a great swim but it was still under 60mins!
T2. 2.20
A reasonably quick transition. The volunteers were awesome in assisting me.
I grabbed my bike and just remember having the biggest smile as I existed T1. I think I even gave a woohoo as I left! 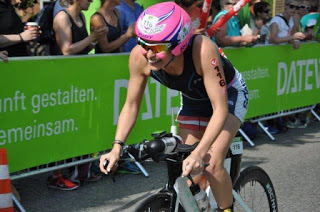 The first few km’s on the bike was insane! Just the best feeling I’ve ever had in a race.

Approx 10km in we passed the first banner, lined streets with a male German on the mic. “It’s Lisa from down under” he said so I smiled and waved to the crowd. “Lisa’s laughing, she’s laughing” he said back. I was just thriving off the thrill of the race. I loved it. I found myself riding with another Perth athlete and a female pro for most of the first lap. I was watching my km’s, anticipating solarberg hill. Then as it approached the crowds grew. I was pumped. I turned the corner and there it was. The best feeling came across me and I rode as hard as I could to pass the female just ahead of me. I wanted a clear run up there first! It was INCREDIBLE! I smiled, yelled, and just felt awesome up that climb. ‘Hop, hop hop!’ ‘Super super’! I never felt unsafe. The crowd was just amazing. 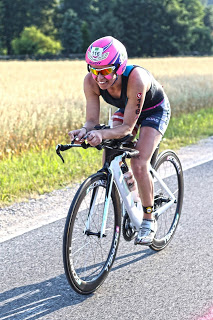 I finished the first lap and just turned onto my second when my rear spares box lid came off and ‘tink’, my canister, valve and blade hit the pavement. With the lid dangling off the rear of my bike I needed to stop and attempt to put this back on. Once the lid was back on off I went again, a little flustered. What if I get a flat? I had an extra canister in my back pocket (I always do, paranoid about getting a flat) but no way to use it. Then the team riders came whizzing past. Frustrated at their freshness and speed I became a little negative. Then I remembered I had a pit stop and convinced myself I would be fine. The second lap was a lot more tough. It was warming up and became really windy. All I thought was ‘how is this a fast course?!’. I tried to remain positive and only a few female competitors had overtaken me. The second time the crowds had dispersed from solar hill but still a great experience.
I made the right hand turn for the last 10km to T2. I looked at my time and was slightly disappointed and so desperately wanted to get off the bike. I forgot to get out of my shoes and dismounted rather slow with my shoes still on!
Bike. 5.32
T2. 2.02

Finally I was onto the run. Out and back run courses are not my favourite as I much prefer laps so I can count down and mentally trick myself with how far to go. I was however prepared for this course as my long training runs are of the one loop nature. The first few km’s were fast, then a gradual incline. I felt good. I settled into a rhythm and just counted down the km’s. 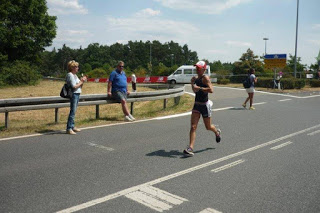 At the 10km mark I started to count the females coming back, which was the first chance I had to see where I was positioned. I found it difficult running on the off road track. My foot placement was a little all over the place and I could feel my blister growing from the uneven surface!

Gel, water, ice, sponge, sub 3.30 marathon, finish line. This is all I though of. As well as I don’t want to race IMWA in 20weeks time!
I was super aware of the 32-34km mark, this was my dark, dark hole in IMWA 2013 and I remained really positive over this stretch.

Back down the hill we previously ran up. ‘Wow, super super’ the Germans said. Then 40km! 2km to go! Through the town, through beer mile. I hi-fived everyone I could. I smiled (or tried too). I could not figure out where I was in Roth and I couldn’t remember or picture where the finish line was.  Then I saw the train tracks and relief, there was the massive purpose built stadium for this iconic and incredible finish. 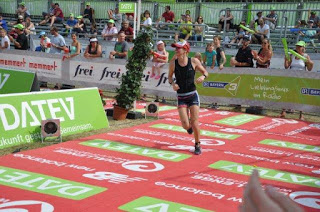 Run. 3.26
I cracked that 3.30, my personal goal for this race.
I had, as usual an emotional cry as I put my hands on my knees and bent over. I was asked if they were sad or happy tears. ‘Happy tears’ (of hurt & joy!) I said as I sobbed a little more! Straight through the tent to get a massage, shower and change. Private showers but a unisex open change area was the most interesting part of the day, with plenty of european ‘sausage’ on display!  After that eyeful I left recovery and waited for friends and participants to come through while tracking Andy and getting a spot right on the fence to see him come through. So worried he would miss me but he spotted me just in time. I was so proud.
We did it! We have complete Challenge Roth!
A later look at the results showed 25 seconds between the female 25-29AG.
10.02.35 – 10.02.50 and 10.03.00 what a close finish!
First Australian female Age grouper, 3rd AG 25-29, 17th Female overall. More than I could have hoped for!
Race Report – Challenge Roth 2015 – Lisa Tyack
Tagged on: race report