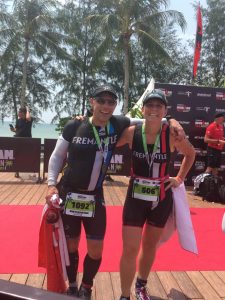 The conversation kinda went…
Justin – Well you’re coming to the training camp, and your coming to Bintan and you’ll have all your stuff, why not do the 70.3 that way we’ll be starting the camp equally tired…

So, July 2018 brought some fantastic new experiences for Helen and I as we set off on a trip to Indonesia and Thailand. My first time to either country, my first trip with a bike and finally my first 70.3 with all legs completed at the same event!

The swim leg in 27 degree, mill pond like water, had a long wade in and out to reach swimming depth. Being of a somewhat shorter stature I finally had another advantage in that I could get swimming earlier. It was a clearly marked triangle and I was surprised that my Garmin reported a slightly longer 2030m swim. Calf compressions were not allowed in the swim so there was no chance of a swim PB for me!

The bike leg starts with 5k heading out and up and over a hill (about 50m of elevation) towards the checkpoint. Having taken the bus tour of the bike course, I knew that the same hill would greet me on the return. The roads were good but not closed for the event. Initially this was daunting but I quickly worked out that the traffic was really very courteous! The rest of the course was rolling, with just over 800m of elevation for the entire course and I recorded an average of 32 degrees with a max of 40. Another great part of the ride was the huge number of spectators with lots 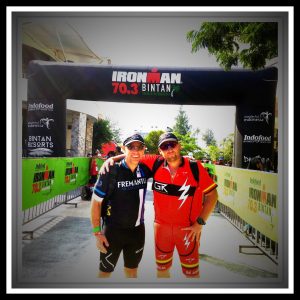 of kids looking for high fives and presumably bottles!

Getting off the bike was when I really discovered the temperature. The run course was slightly cooler with an average of 32 and a max of 37, but there was no shade, little breeze and just a smidge (oh my gosh!) of humidity! There were 16 aid stations (I counted every one!) handing out sponges initially and dousing you with saucepans of water by the end.

I thoroughly enjoyed the entire event and the Fremantle lycra got lots of recognition and support, which is exactly what you want when you’re starting to flag! Congratulations to everyone who took part and thanks to everyone who gave me tips and advice along the way. 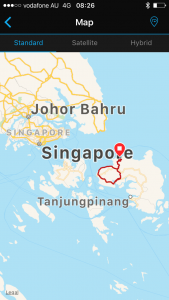